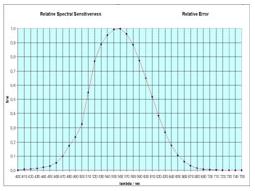 In order to have also a well defined photometer, an “artificial eye” has been constructed to simulate the light sensitivity of the human eye. The relative response of the normal human eye to monochromatic light at the different spectral frequencies was determined experimentally by the CIE and standardized in 1924. This is known as the photopic luminous efficiency function. The symbol of this function is V(λ) and it is usually expressed as a function of the wavelength of light (in air).

The following procedure was conducted to determine the photopic luminous efficiency function: First, light of constant intensity was emitted and its frequency was varied until the lightness perceived by the observer was found to be maximal. This occurred at a frequency of about 540 THz, corresponding to wavelength λm = 555 nm. The wavelength was then set to another λ and the power was readjusted until the lightness was judged to be the same as at λm. V(λ) could thus be computed as the ratio of the radiated power at λm and λ, respectively.

Of course, this experiment has been conducted by many observers and the resulting average was used to define the so called CIE standard eye which is an optical sensor with sensitivity corresponding to the function V(λ).

The photopic luminous efficiency function serves as a link between the subjective response of the human eye and normal physical measurement techniques. It thus provides the basis for a group of photometric units.

X-Rite – proprietary photopic filters consist of several elements designed to match the CIE photopic response curve to achieve an f1 to better than 1.5% at all wavelengths (f1 < 1.5 % defines the highest accuracy class L according to DIN 5032 and CIE No. 69). The sensitivity in the IR and UV range is reduced to a minimum < 0.1%. The careful design of the detectors ensures best-of-class equipment and repeatable measurement results, even for monochromatic radiation sources.

Precision operation amplifiers convert the photocurrent in nA resulting from the light sensation into a proportional voltage. The voltage is converted by a precision AD converter into a signal that is proportional to the expected illuminance (luminance meter) in lux.

Each Lisun’s  e – Optronik’sphotometer is carefully tested and calibrated in our own calibration laboratories with intensity calibration sources traceable to National standard (PTB); e.g., a WI41Gcalibration bulb operated under stable conditions (25°Cambient temperature), electrical values with a color temperature corresponding with CIE standard illuminant A (2856 K).

Lead in CFL and LED Tester. Click to our product lists: